On 29 July 1975 Brigadier (later General) Murtala Muhammed in a bloodless coup took over power from General Gowon who was in Kampala for an Organisation of African Unity (OAU) meeting. General Muhammed was himself killed in an abortive coup on 13 February 1976 leaving his deputy, General Obasanjo to continue his programme. This situation gave the regime the tag, Murtala-Obasanjo regime. 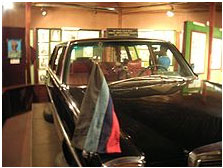 The car in which Murtala Muhammed was assassinated

Shinaayomi Oyelana asked 2 months ago • Government
195 views0 answers0 votes
What are the roles of the respective components of Nigeria precolonial administration?
Open

ClassHall Instructor asked 3 years ago • Government
1269 views7 answers-1 votes
In Nigeria, what is the maximum number of years a president can stay in power?
Open